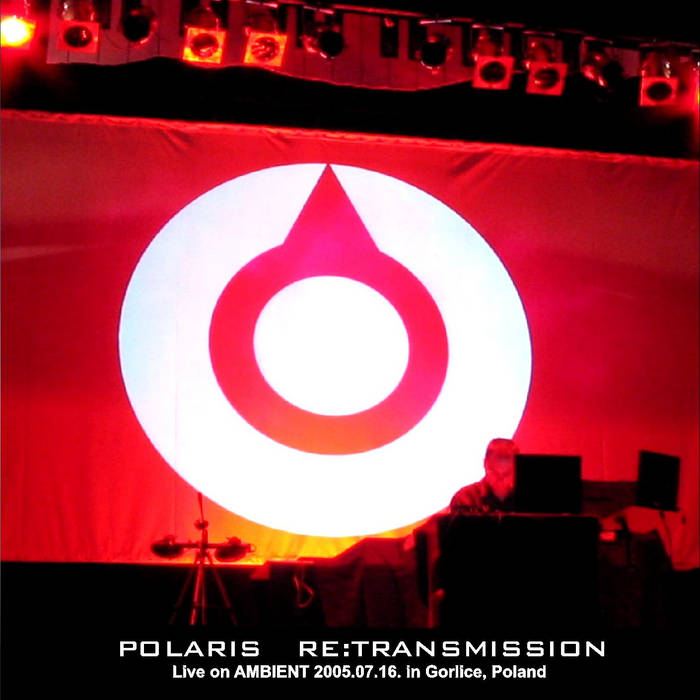 Re:Transmission is the release from Polish EM wizard, Jakub Kmiec and is in fact a concert recording, taken during the 7th Ambient event in Gorlice, Poland in the summer of 2005.

There are 8 tracks on offer, one of which being the obligatory introduction sequence that somewhat reminds me of the time when I first listened to TD's Poland album, for those of us among us old enough to remember it upon its release back in '84! In fact it is interesting to note that later on in the set some early 80's TD influences can be heard on one track in particular, so this could well be one for those who appreciate that period of TD 80's output. Although it has to be said, according to the pictures on this particular album's sleeve notes, gone are the days of the massed banks of keyboards and wizzardry. Call me old fashioned but the thought of laptops these days replacing stacks of Moogs and other electronic mechanical devices just doesn't quite have the same appeal, (sorry Dave). Putting technicalities aside however, it is the music that counts of course and what we have here is a very consistent live album, probably one of the better EM ones to have emerged in the past few years.

Track 1 as already explained to some degree is the introduction and not having my Polish handbook with me, the narrative literally goes over my head as does the music (if you can call it that), which is solely intended as a backing track, comprising of white noise drone-work and effects. This is not a taste of things to come however and should not deter the listener into thinking that this is going to be one of those albums to avoid. On the contrary this is a well-produced and competent release from yet another musician whom I have never heard of.

The 'real' music starts at track 2, 'Crumbling' which is also not a reflection on the album or direction of the music. Starting off in much the same way as track one though, with its white noise section, but more interestingly this time adding delay, a high drone undercurrent is introduced. Sequencer type effects then enter but at just over the 4-minute mark a slightly odd bass rhythm takes hold, closely followed by light percussive elements. Further mid tempo sequencer patterns arrive with effective use of string chordal textures and washes of extra light percussive moments, giving further direction and stability to the piece. Going through stages of transposition eventually a more defined theme, expanding to an analog moment, together with a more prominent rhythm section concludes the first track.

Rain type effects grace the first section of 'Recovery Time', the shortest piece on the album at just under 4 minutes. These effects eventually pan out and the inclusion of soft, almost bass-like sounds, together with organic textures and mild atmospherics create a somewhat mysterious feel.

'Ab Ovo', track 4 begins in high drone territory over a backdrop of Birdsong. A delayed and mid to fast sequencer pattern takes hold over percussion samples and loops. A 'current of resonation' lies at the base of this piece as it moves forward. A bass sequencer pattern, not dissimilar to that of Jarre begins but the whole piece manages to capture a sense of the dark and menacing about it, although towards the end lighter string chords are encountered.

Track 5, 'Code:Voice' does just what it says on the tin and starts with an array of delayed vocoder effects. An organ styled drone enters alongside light percussives creating an obscure but nevertheless effective moment. A string synth undercurrent together with a distinguished solo lead line gives the piece some added melodic stature.

'Arboretum' is one of the album's 'stand-out' tracks and starts with a sparkling, mid to fast sequencer line. Again light percussion samples enter and a pleasant string motif takes hold before further bass sequences add to the mix. Later a slightly tremoloed analog lead line enters, creating a slight moment of obscurity, but done in such a way as to enhance the overall feel of the piece without destroying it.

'A Way Back' goes back to the sounds of white noise but it is not long until a mid tempo bass sequencer pattern enters over string chords. Another sequencer line takes hold and it is here that the TD influences come to the fore, sounding not dissimilar to their early 80's sequencer work that is to be found on their 'Thief' or 'Exit' releases, or concert music of that period. Moving through effective transpositions a lead line comes to the fore at just over the half way mark.

'Transmission' ends the set and it is not really an all out fest of synth splendour, remaining in quite laid-back form throughout. Light synth chords and effects, almost sequencer like transpose through the piece occasionally. An obscure sampled and deep percussion loop enters over sections of weird beeps and buzzes, sounding like the equipment knew it was the end of the set and deciding enough was enough. A bass theme does give at least some meaningful direction to the piece but doesn't end things really on a 'high' note.

Overall a very interesting album and as mentioned earlier is without a doubt one of the better EM live albums out there today. It should appeal to those more into the digital realm of technology but it does however manage to create its own effective moments inspired from some of the genuine legends of EM at the height of their 'game'.
(DC) www.synthmusicdirect.com/retrans.cfm

Preface in "Introduction" by Jerzy Kordowicz.

"It's only me, my synths and my imagination"

Bandcamp Daily  your guide to the world of Bandcamp

Cannibal Corpse's George "Corpsegrinder" Fisher stops by for an interview